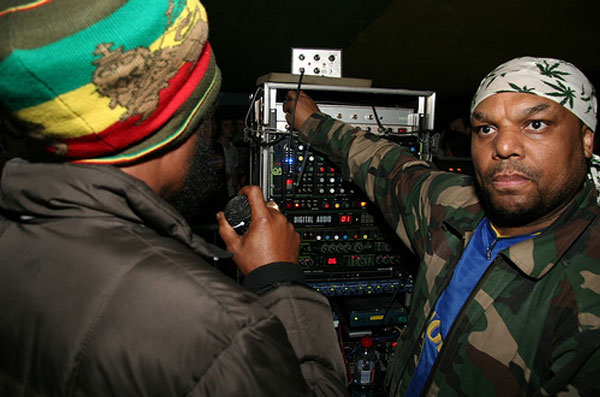 Iration Steppas was originally set up by Mark Iration as a sound system in Leeds, where he played the latest sounds at blues dances, clubs and parties. With a posse of like-minded individuals Iration toured the country absorbing various sounds. With Papa Sam, the sound initially performed under the name Ital Rockers Hi Fi. Notable influences were Jah Shaka and Jah Tubby. Iration acknowledged that he was amazed by Jah Tubby’s collection of original dub plates when he secured his first acetates. A sound system clash in Leeds against Jah Shaka resulted in praise from the legendary soundman, encouraging Iration to continue in the business.

In 1993, Iration linked up with Dennis Rootical (under the guise of Kitachi), performing the leftfield dope beat sound. Live appearances by the duo were greeted with enthusiasm, playing festivals and clubs around the UK. They are also acknowledged as being the first to utilize DAT recordings of their own tunes at the High Rise studio in Leeds and to mix them live. With Jack Rouble joining the group, their reputation grew and Iration Steppas released the classic “Scud Missile” in 1993. The single was met with enthusiasm and demand led to the discomix being re-pressed three times before eventually being deleted. The initial hit was followed by the equally popular 12-inch discomix, “Mystical Warrior”. Acclaimed by the media as Jah Shaka’s “enlightened offspring”, they followed the hit with two 10-inch releases, “Reminiscence Dub” and “Killimanjaro” both of which were featured on their debut album. As Kitachi they released three dope beat singles, “Spirit”, “Scratch Remix” and “Heavyweight”. The new wave of dub followers can also discover many specials recorded for a variety of 90s-style dub compilations, including Macro Dub Infection, Dubhead Volumes One and Two, Club Meets Dub and Dope On Plastic.